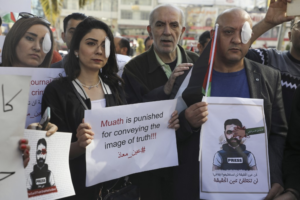 Palestinian photojournalist Mu’ath Amarneh was blinded in one eye after Israeli troops fired on protesters last Friday near the West Bank city of Hebron. Israeli military officials claim they did not target Amarneh but were using ‘nonlethal’ means to disperse protesters against the confiscation of Palestinian land by the military. Amarneh says he was standing to the side wearing a flak jacket with press markings & a helmet & that seems borne out by photographic documentation. But the Israeli military released a video of what they claim is Amarneh standing behind a group of stone pelters. Stone pelting is a euphemism for unarmed Palestinians who resist occupation & colonial expropriations.

Palestinian journalists in several West Bank cities protested the assault on Amarneh by wearing eye patches in solidarity with him & demanding the end of assaults on journalists & protesters. The Israeli military responded to the journalists protesting with tear gas, manhandling, assaults, & injured at least seven other journalists.