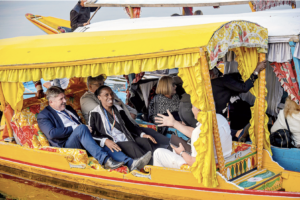 It must have been so much fun for rightwing members of the European Parliament to have an all-expense paid vacation to beautiful Kashmir which they could write off as fighting the ‘war on terror’. Since they were there as guests of the Indian government, they could put aside the unpleasantries of interviewing mothers whose small sons were abducted by the Indian Army & sent to hell hole prisons in India to mix with adult criminal prisoners; they could avoid talking to young people blinded, disabled, disfigured by pellet munitions; they would be spared visiting the torture centers where the Indian Army uses sexualized violence & CIA kinds of torture on political prisoners. Instead they could share lavish meals in posh hotels with Indian Army officials & collaborators & take a scenic shikara ride on Dal Lake in Srinagar. The Indian Army stopped traffic & found a deserted stretch of the lake where the EU delegates would have no contact with the plebeian elements of Kashmiri society who might want to talk about the curfews, mass arrests, sexual violence, pellet guns, telecommunications blackout.

All the delegates had to do in return for a free sightseeing tour of beautiful Kashmir was, as Sheikh Sajjad put it, “endorse genocide & extend support for illegal occupation”. We sure hope that shikara spin was a hell of a ride because media refers to it as the “disaster on Dal Lake”. The EU delegates exposed themselves as Muslim-haters, genocide deniers, bought, for sale, on the take for the Modi regime in its attempts to whitewash genocide. International ignominy, disgrace, & ridicule is a heavy price to pay for a boat ride & a few free meals. It also didn’t win them many friends in high places since the ideology & mythology of the Islamophobic ‘war on terror’ has been jeopardized by this pack of rightwing fools who jumped at the chance of a free trip & didn’t respect the pernicious subtleties required to vilify entire nations as terrorists. The mediocrity & venality of fascism have never been more exposed.

(Photo of EU delegation on Dal Lake from PTI)