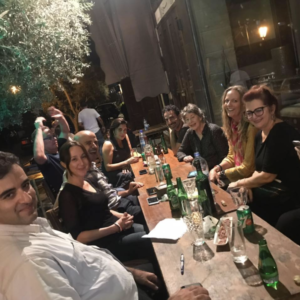 Greta Berlin is a long-time supporter of the Assad regime, of Syrian & Russian bombing of civilians, & an associate of fascist & Assad propagandist Eva Bartlett. She is presently on a tour of Syria, likely guided by Assad minions, to discredit the Syrian Arab Spring & prove how popular bombing civilians is in the name of the Islamophobic ‘war on terror’. Unfortunately, several of my friends don’t object to her political views but I keep at least six degrees of separation from her Islamophobic & anti-Semitic politics. The suffering of the Syrian people, including Palestinian refugees in Syria, is so extreme that continued affiliation with Assad ideologues & their followers is not tolerable to me. Those friends of mine who approved of her propaganda tour have been unfriended.

(Photo taken on October 19th in Damascus of Assad propagandists Eva Bartlett, Vanessa Beeley, Laith Marouf, with their followers Greta Berlin, Donna Nassor, Linda Cooper, and others for a triumphal celebration of the defeat of the Syrian Arab Spring. Meanwhile, Idlib and northeast Syria burn. This meal is after Berlin and others toured Syria to celebrate the defeat of ‘terrorism’.)