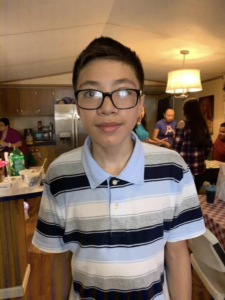 Miguel, who is Charlie’s nephew & was at his birthday party tonight, is thirteen now & proficient in English & Spanish. I first met him when he was less than three. He isn’t just proficient in English but has a way with words that makes me think he could be a writer though his interests are mainly in mathematics. He’s a very smart kid.

He’s an American kid with family roots in Mexico & after spending the summer there at five, his first report to me on his return was how he had learned to fake fart. He’s so much cooler than that now. I love most kids but have a special place in my heart for Miguel. I just love the kid.

At Charlie’s party, I talked to two senior women who had both immigrated here from Mexico many years ago. One is 76 now but after her divorce in her 40s & with grown kids, she became an over-the-road truck driver, surely one of the first in a generation of women pioneers. The other was an ICU nurse who took a special master’s program in Mexico many years ago on bereavement counseling especially for those faced with sudden death from suicide, accident, or homicide. The course was 600 miles/965 km from here & she had to drive it every Friday after work for two years. Because she was proficient in Spanish & English, they needed her to explain to those coming out of comas, etc. why they were missing limbs or that their family members had been killed. Amazingly tough women & so beautiful in every way.