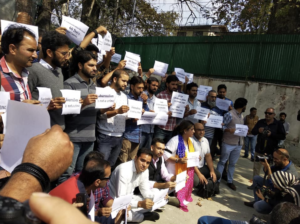 Kashmiri journalists, who face arrest under the normal conditions of occupation & even more so under the siege & blockade (if not forcible disappearance), came out to protest the suppression of press freedom on October 3rd, nearly two months into the blockade. The immense courage of the spirit of azadi speaks for itself.