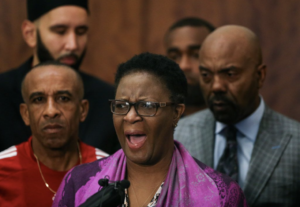 Such an important commentary by Imam Omar Suleiman on the grace of forgiveness displayed by Botham Jean’s younger brother toward Officer Guyger & the outrage expressed & accountability demanded by his mother.

Omar Suleiman
October 3 at 7:56 AM ·
If you’re going to amplify the grace of his brother, you must also amplify the outrage of his mother.

Firstly, Brandt Jean was 16 years old when his brother was murdered. He showed the nation yesterday what type of family he comes from. He tried to emulate the faith and forgiveness that his brother modeled for him. It’s important to understand that that was the type of young man Botham was also. At his funeral last year, every testimony of him was similar. This should make it all the more tragic. An 18 year old shouldn’t have to be burdened with that type of moral responsibility. I’m proud of him but don’t want to see a teenage boy put in that situation again.
Secondly, the way Brandt’s grace is being exploited to silence his family and all that are calling for police reform is dishonest and disgusting. “His family forgave her so why can’t you” is deliberate ignorance. Botham’s mother Allison spoke minutes after Brandt saying that while officer Guyger had 10 years to reflect on her actions (likely much less with parole), those of us in Dallas need to fight the blatant corruption in the police department and system here. There were many mothers standing beside her yesterday whose children were murdered without even getting a trial.

Grace and accountability are not in contradiction.

Officer Mike Mata and Martin Rivera need to step down and be investigated immediately for their corruption. We need to continue to push for consistent standards. We all know what would’ve happened if Botham was the one who walked into Amber’s apartment and murdered her without even trying to revive her, then tried to cover it up. We would be looking at the death penalty right now. Is calling for consistent standards really that radical? For officers to not be able to turn off their body cams when they feel like it, delete incriminating evidence which shows their racist past, or not be pampered by the system that allows them to operate without accountability in the first place? I haven’t even started with the thousands of people in prison for longer than what Guyger got for committing non-violent crime, many of which are questionable in the first place.

I’ve said from the very start we should center the family, and broaden the discussion on policing. I personally am forever indebted to the Jean family for what they brought to Dallas. Botham’s mom brought attention to the ugliness of the corruption of the city, and consistently tried to uplift the mothers of other victims who didn’t get the attention her son got.

I will never forget these words from her and hope they reverberate through our souls since we suddenly love the family so much after witnessing Brandt show such grace yesterday:

“When you lose a child, you feel the labor pains in your womb again.”

I’m sorry you’ve experienced so much pain Momma Jean. Your son’s life clearly meant something to many people. So too will his death God willing.