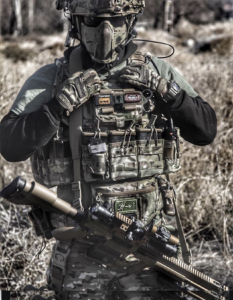 There are hundreds of photos of Indian soldiers in Kashmir with their faces covered in this counterinsurgency equipment or in balaclavas. Some of the images are of them facing off against unarmed protesters, others of them terrorizing little schoolchildren on the streets. So when Indian media reports that soldiers sustain injuries from stone pelters, it’s really hard to take that seriously let alone justify the use of pellet guns or the arrest, incarceration, & torture of 13,000 Kashmiri boys as stone pelters & rioters. Cry us a river.

Indian Army General KJS Dhillon–commander of Indian forces in Kashmir & summoned by a US District Court for human rights crimes in Kashmir–told a press conference just before the siege & blockade began that ’83 percent of Kashmiri ‘terrorists’ were once stone-pelters’. He’s just making that up. India has no idea if stone pelting leads to guerrilla warfare. It more often leads to being shot, blinded, arrested. He also said, “Seven percent of terrorists die within 10 days, nine percent in a month, 17 percent in three months, 36 percent in six months & 64 percent in a year.” By his own statistics, there is no problem with “radical Islamic terrorism’ in Kashmir because India has operated more than one hunt to kill operation every day for the past several years. Reliable Kashmiri sources reported just a few years ago that only about 200 armed militants operated in Kashmir. Most of them were killed in hunt to kill operations that also killed & injured civilians.

Not everyone agrees with stone pelting but it’s used by mostly working class youth in Kashmir & in Palestine. What bothers Indian & Israeli troops is not that they sustain serious injuries from stone pelters so much as the defiance of youth, the fearlessness, the obstruction stone pelters, who function as civilian defense guards, present to shooting down unarmed protesters.

We stand with stone pelters. So shoot us. We demand the immediate release of all Kashmiri political prisoners & the immediate, unconditional withdrawal of all Indian forces from Kashmir.