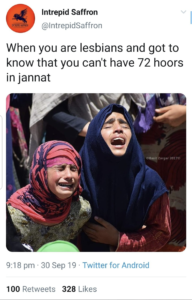 Most human beings will be aghast at the psychotic pathology of Hindutva nationalists who mock the unimaginable grief & suffering of Kashmiris with this kind of amorality & hatred. This is one fascist’s version of the ’72 virgins’ crap that is ubiquitous in Muslim-hating propaganda & is on a continuum with Assadist claims that White Helmet rescue workers traffic human organs. This Hindutva fascist also posted a photo of a weeping Kashmiri man with the comment “…he’s crying because his 6 yr old wife refused to have sex with him.” Kashmiris weep because of 72 years of colonial savagery; because they have seen thousands of their beloved raped, beaten, disappeared, tortured, jailed, blinded & incapacitated with pellet guns, shot down in the streets, dumped in mass graves, their children suffering a hell on earth.

There are those who do not believe that Muslims have become scapegoats, who deny genocide & persecution, who invent & propagate slanders to justify war, occupation, genocide. Assadists, Stalinists, & fascists have made the Syrian Arab Spring their pièce de résistance in fostering hatred of Muslims & of Jews. Because of the monumental importance of the Kashmiri struggle in rebutting all that & the solidarity they have always shown with the oppressed, the same kind of hatred will be directed at them & will escalate, particularly attempts to associate them with ‘radical Islamic terrorism.’ Kashmiris, like Palestinians & Syrians, fight as they weep & strengthened in their struggle by an international solidarity movement & a boycott of India can send these Muslim-hating fascists back under their rocks, decisively defeat the scapegoating of Muslims, & lead the way in the struggles of the oppressed for freedom.