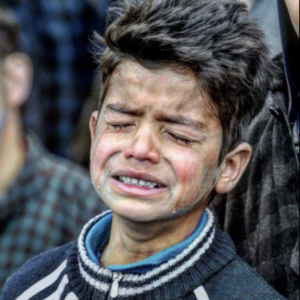 This is nine-year-old Burhan Fayaz at the funeral of his best friend Amir Nazir who was killed by Indian forces in a hunt to kill operation in the Pulwama district of Kashmir in March 2017. Burhan said, “Amir was like my brother. Who will I play with now?”

The image of Burhan’s inconsolable grief has become iconic, a representation of Kashmiri children living under occupation in the same way as the image of Phan Thi Kim Phuc, the nine-year-old Vietnamese girl running naked from a US napalm attack in 1972; in the same way as images of 3-year-old Syrian Kurdish refugee Aylan Kurdi who drowned in the Mediterranean in 2015 & images of 5-year-old Omran Daqneesh in shock after being pulled from the rubble of Syrian bombing in Aleppo in 2016; & in the same way as images of 16-month-old Mohammed Shohayet, the Rohingya infant who drowned with his 3-year-old brother & mother in the Naf River as they fled from genocide in Burma in 2017. Images of children are not published to exploit their grief but because they speak to our hearts more powerfully than all the political arguments in the world against war, occupation, genocide.

When Kashmiri human rights leader Khurram Parvez posted this photo in 2017, he quoted Pakistani poet Faiz Ahmad Faiz: “How many rains will it take to wash away the blood stains?” A Kashmiri poet wrote:
“Let the world answer his tears
Let the world watch his heart break
Let the world listen to his cries
Let the world see his innocence
Let the world know what he had lost”

Let Kashmiri solidarity try to answer this little boy’s tears since the Indian Army is incapable of mercy. Kashmiris no longer stand alone against genocide. We commit to Kashmiri children that we will stand with them so long as they are denied self-determination & human freedom.