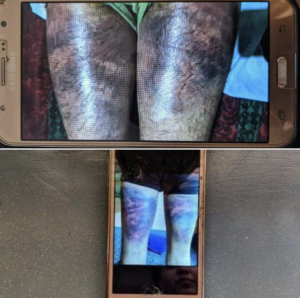 These photos are from a Washington Post article today titled “The night the soldiers came: Allegations of abuse surface in Kashmir”. They’re phone shots from August 7th of 24-year-old Muzaffar Nabi, a carpenter who was given electric shocks & beaten by Indian soldiers with sticks, rods, & cables. Nabi was bedridden for a week, not only with these abrasions but with episodes of vomiting & loss of consciousness. Afterwards, he needed help to walk or go to the toilet. The ordeal was so hellish that Nabi said, “If suicide was allowed in Islam, I would have done it.” That’s the ‘normalcy’ of how the Indian Army tries to ‘win the hearts & minds’ of the Kashmiri people.

Demand the immediate, unconditional withdrawal of all Indian troops from Kashmir.