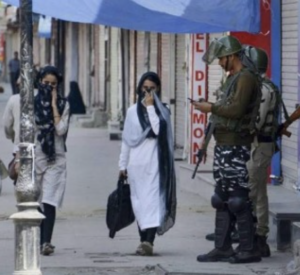 This is a very powerful photo of two young Kashmiri women walking past Indian soldiers. They’re most probably holding their veils over their face, not because the soldiers stink, but because women get sexually harassed in the most vulgar & debased ways by the soldiers. Many have been sexually assaulted & some raped & murdered. That’s the character of military occupation. Occupation is a women’s rights issue.

Demand the immediate, unconditional withdrawal of all Indian troops in Kashmir. Out now!