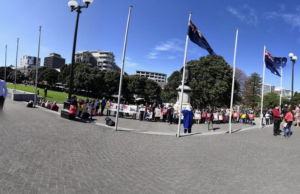 “Thank you everyone who came to Wellington to show support for kashmir. All those people who took a day off from work, family and social commitments, you have today become the voice of kashmiri people who are not allowed to speak, who are living in a communications black hole , who’s future is being dictated by their opressor. I would like to thanks Golriz Ghahraman MP for receiving the petition that kashmiri community and friends of kashmiri community in NZ have presented . We all urge Indian government to lift the siege on 8 million people, we urge them to respect and implement UN resolution regarding kashmir. We , kashmiris have suffered enough , we want resolution of Jammu and kashmir , as per the wishes of all the people of the region. A peaceful solution can not be reached by caging the inhabitants of a place and imposing restrictions on them , that’s what dictatorships do , it’s contrary to the ideals of democracy .”