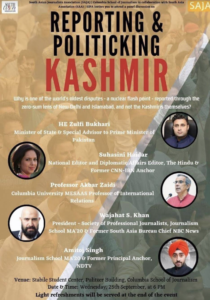 Columbia University has a forum today on why Kashmiri voices are excluded from discussions on Kashmir without having a single Kashmiri speaker. It’s not that the sarcasm & colonial racism escapes them. Recently, they held a forum where Indian journalist & Modi propagandist Barkha Dutt was a featured speaker. It’s all about collusion with India in silencing Kashmiri voices & most likely part of a sophisticated campaign to make Kashmir a territorial dispute between Pakistan & India, not a struggle for Kashmiri self-determination against India’s colonial occupation.