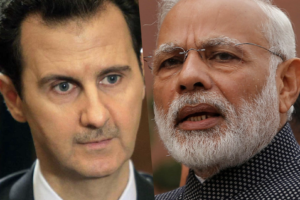 At the height of India’s murderous crackdown on the 2016 Kashmiri uprising, the Indian government sent a delegation of business representatives from the petroleum, electrical, information technology & hospitals industries to explore investment possibilities in Syria. They don’t have enough public schools or a modern sanitation system for everyone in India, but they were offering to rebuild what Assad, Russia, & the US-coalition had bombed to smithereens in Syria.

The Assad regime has not yet spoken out directly in support of India’s siege in Kashmir like Russia & the US have, but as this article from June 2019 points out, there have been high-level negotiations between India & Syria who propagandistically posit themselves at the center of the Islamophobic ‘war on terror’.