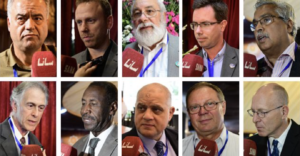 Cuba sent a delegation to the phony third annual trade union conference in Damascus. One of the delegates said ‘Cuban workers share the joy of the Syrian people defeating terrorism’. He didn’t mention the millions of refugees, the carpet bombing, the millions killed or tens of thousands injured. In July, a group of representatives from the Cuban pharmaceutical industry also visited Syria to provide drugs to the Assad regime in its war against the Syrian Arab Spring while Syrian war planes are bombing hospitals. Turkey, Egypt, Iraq, & India were among the other countries with delegations to what was not a trade union conference at all since Syria outlaws unions & only has a front group confederation controlled by the Assad regime.

It was a meeting of Assad propagandists, creepy kinds of people who crawled out from under their rocks to suck up to a dictator & attend the trendy nightclubs in Damascus on Assad’s tab. As for Cuba, too many who live in the past need to stop the groveling & apply some analytical skills to how badly the principles of socialism are being betrayed by the Cuban leadership.

(Photo is some of the creepy participants at the phony, almost entirely male trade union conference in Damascus, from Sana, Syrian state-owned media)