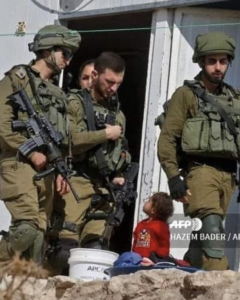 Doesn’t this photo of heavily-armed Israeli soldiers with a Palestinian child whilst engaged in a home invasion near Hebron in the West Bank resonate with the photo of Indian paramilitary forces ganging up on a little Kashmiri boy & forcing him to do calisthenics? In this case, moments after this photo was taken, the baby’s family home was bulldozed & they were left homeless.