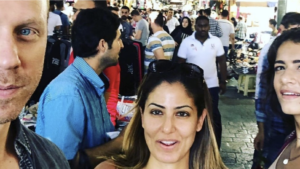 Artist Molly Crabapple responded to this & other photos from Max Blumenthal (millionaire playboy shill for dictators), Rania Khalek & Anya Parampil (both employed by Russian state-owned media) showing them dining at trendy nightclubs in Damascus while they attended a conference for Assad propagandists–all while Idlib is being bombed & refugees forcibly deported by Turkey back to a war zone. Crabapple scathingly tweeted, “This is some Goebbels shit. Prancing around Syria on a government luxury tour, posting tourist photos near torture centers, & mocking Syrian refugees who can never return to their country without risking being tortured to death.”

In an interview on wholly Russian state-owned RT, smarmy Blumenthal & marble-mouth Khalek were asked about being compared to Goebbels & the avalanche of ridicule & criticism they received for doing the round of nightclubs & shilling for Assad whilst Idlib was sustaining an apocalypse. Khalek answered, “This isn’t something new to us. We are used to it.” In fact, she once admitted that before she decided to advance her shabby career by sucking up to the Assad dictatorship, she was on a whirlwind of speaking engagements at Palestinian & Middle East student & solidarity groups. That ended with a thud when she began spouting Islamophobic ‘war on terror’ rubbish in support of Assad. She’s a pathetically confused fool because during her first trip to Syria a few years ago around the fall of Aleppo to Assad, she was embedded with the Syrian Army along with Bartlett & Beeley & accused Assad minions of trying to poison her food. This led to Bartlett & Beeley denouncing her vigorously. But now Khalek has had her ‘road to Damascus’ moment & has learned to love the bomb as a way to defend dictatorship & salvage her shabby career.

It’s good they’re ‘used to it’. Because while Blumenthal has a family fortune to bankroll his jaunts around the world shilling for dictators, he is now discredited except among Stalinists & halfwits (like the ones who run Verso press & publish his trash). Khalek, Norton, Parampil now rely solely on Russia to support them. They aren’t particularly intelligent & don’t exhibit an iota of investigative skills or journalistic integrity–or maybe it’s just that groveling before state power brings out the stupid in people–so that gig is unlikely to last. As Kremlin employees, they will be asked to do for Putin what they did for Assad & what Bartlett & Beeley are doing now for Assad & Putin. Political disgrace & ignominy looms in their imminent future.