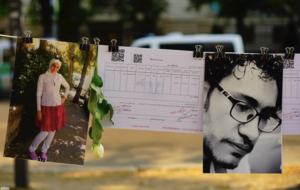 Relatives of those forcibly disappeared in Syria protested outside the Russian embassy in Berlin to demand the Assad regime disclose the whereabouts of those held in prisons & demand their release. In recent years, hundreds of Palestinian refugees in Syria learned that Syrian authorities registered their missing family members as dead, mostly from sudden heart attacks while in custody.
In the political tradition used around the world by family members who have lost someone to forcible disappearance, the protesters hung photos of their beloved, many of whom were tortured to death in Assad’s gulag.

(Photo from Action Group for Palestinians in Syria)