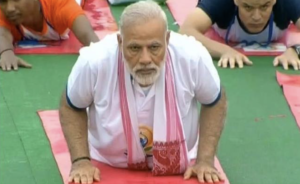 Just happened across this 2017 post about Modi’s use of yoga to serve Hindutva ideology & the persecution of Muslims in India & Kashmir.

June 21, 2017
This is the third International Yoga Day, declared by the UN in December 2014 after a campaign by Indian prime minister Narendra Modi–probably as a way to remove the stench of disrepute from his involvement in the 2002 pogroms against Muslims in Gujarat.
For Yoga Day 2017, Modi chose to lead asanas in Lucknow, Uttar Pradesh with Chief Minister Yogi Adityanath to teach Indians to “yoke body, mind, & soul,” as he said in a speech to thousands assembled in the rally ground. The choice of venue isn’t because Yogi Adityanath is known for facility with yoga asanas–because the guy is more unhinged than yoked–but because he is a rabid Hindutva nationalist also involved in violence against Muslims & Christians.

In 2015, the Indian government attempted to make Yoga Day compulsory, at least for schoolchildren. Muslim organizations objected because in yoga there is an asana sequence called Surya Namaskara or Sun Salutations bowing to the Sun God & as a monotheistic religion, Muslims bow only to Allah. Our man Adityanath supported compulsory Yoga Day saying those who don’t agree can “leave Hindustan” & those who oppose Surya Namaskara should drown themselves in the sea.

Adityanath is a polarizing figure renowned for demonizing & inciting hatred & aggression particularly against Muslims. He proposed installing statues of goddesses & gods in every mosque, is a supporter of Trump’s Muslim ban, & most egregiously incited Hindus to drag Muslim women from their graves to rape their corpses.

So if Modi hoped Yoga Day would remove the stench of pogroms, his choice of leading the event with Adityanath shows he has a political agenda yoked to the persecution of Muslims & to advancing extremist rightwing nationalism. He can stick that downward facing dog where the sun don’t shine.