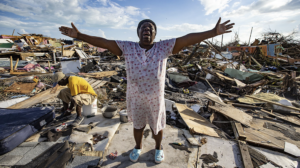 The US is turning away hundreds of Bahamian climate refugees trying to evacuate islands rendered uninhabitable by Hurricane Dorian. Normally Bahamians can travel to the US with a passport & a police certificate issued within the past six months that shows no criminal record. Now, the US is also requiring visas when it is likely that many lost all their papers when the hurricane flooded & destroyed their homes, making them homeless. The prime minister of the Bahamas called it a “historic tragedy” but the US is demanding their paperwork be in order for them to get asylum.

Among passengers who had boarded a ferry last Sunday at Freeport for the two-hour trip to Ft. Lauderdale, Florida, 103 were forced to disembark before departure because they did not have a visa. The ferry company was informed that to travel to the US, passengers would need a pre-clearance authorization obtained in person at immigration offices in Nassau. Freeport is on an island 213 km (132 miles) from Nassau which can only be reached by air or ferry.
During a press conference yesterday, Trump said caution is required in allowing Bahamians to enter as refugees because they could be “very bad gang members” or “drug dealers.” Just like he claims all Mexicans are rapists & criminals. We live in the United States of racism & white supremacy.

The photo is Aliana Alexis of Haiti standing on the concrete slab that is left of her home after Hurricane Dorian hit Marsh Harbour in Great Abaco Island, Bahamas on September 5, 2019.