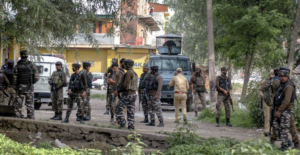 The Print, an Indian media source, has published an article titled “20 Kashmiri youths ‘missing’ since Article 370 move, role of terror headhunters feared.” The article cites Indian Army intelligence sources that ‘terrorists’ have been sighted ‘moving around & conversing’ with villagers in ‘far-flung villages’ trying to ‘indoctrinate impressionable & vulnerable youth’ & recruit them. How do they know they were ‘terrorists’? Maybe they were just young guys chatting with their neighbors. Who fingered them as terrorists? Why weren’t they arrested?

The article says: “Security agencies are said to be anticipating a rise in local recruitment by terror groups following the Narendra Modi government’s decision to abrogate Article 370 & bifurcate the state into two union territories. Since 5 August…terror groups are said to have become active, eager to tap the alleged resentment among Kashmiris at losing their special status.” There you have India’s justification for continued occupation. The twenty missing young men are far more likely to have been forcibly disappeared by the Indian Army than they are to have found a terrorist cell under occupation conditions of curfew, lockdown, telecommunications blockade, & soldiers every few feet.

(File photo of security personnel at Anantnag district in Kashmir | PTI from The Print article, August 30, 2019)