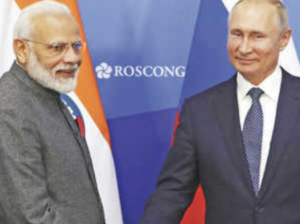 Modi & Putin are meeting in Vladivostok, a port city in eastern Russia near the borders with China & North Korea. Putin said he supports India’s siege & blockade of Kashmir as part of the fight against terrorism. He also said Russia has been supplying the most modern weapon systems to India to do that. Modi said he’s known Putin since he was chief minister of Gujarat (where he orchestrated a pogrom against Muslims, though he didn’t mention that) & “India’s ties with Russia have strengthened over the years.” Then he announced a one-billion US dollars line of credit to Russia for development of Russia’s Far East region. See how diplomacy works?

(Photo from The Economic Times)