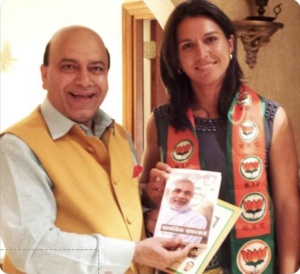 Tulsi Gabbard’s long associations with Modi & the fascist BJP party–not to mention her associations with Assad, Zionism, Islamophobia, anti-Semitism, & General Sisi–should lay to rest any suggestions that her campaign for US president is the least bit progressive–whatever her rhetorical pandering to the Assadist & Stalinist cult that has destroyed the antiwar movement.

Here she is in 2014–wearing a BJP noose around her neck–with Vijay Jolly, a BJP official holding up a biography of Modi at an Overseas Friends of the BJP (OFBJP) banquet. The banquet was to celebrate Modi’s election. Recognizing her as a kindred nationalist & genocidal spirit, Modi invited her to visit him in India that year. When she got married in 2015, a BJP spokesperson (& before that a long time fascist RSS executive) named Ram Madhav, delivered gifts to her from Modi at the wedding party. The RSS, is the mainspring of Hindutva nationalism.

Let it be said to confusionists like Tariq Ali who is promoting her candidacy on his wall, that one cannot support her & at the same time oppose India’s siege & blockade of Kashmir–at least without looking foolish. Perhaps they can learn that you also cannot support the Assad dictatorship & Syrian & Russian bombing of civilians & still call yourself a progressive.

(Photo from The Caravan)