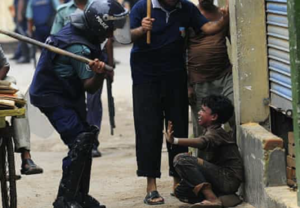 Sorry I lost my temper & blocked the Bangladeshi guy who couldn’t distinguish my criticisms of his government from my attitude toward Bangladeshi working people. But I don’t have the patience right now to deal with obtuseness on that score. I’ve spent too much time studying the poultry & leather industries in the country, the catastrophic health problems of their workers & the pollution of rivers & environmental problems caused by reckless disregard for anything but profits; the super exploitation of child & women’s sweatshop labor, the fires & building collapses that killed hundreds of sweatshop workers or permanently incapacitated them without compensation; the lack of elementary safety protection for adult workers; the killing of labor organizers; & the exponential growth of billionaires off the backs of working men, women, & children.

I’ve been horrified at Sheikh Hasina’s attempts to keep Rohingya refugees out when in flight from genocide, her determination to send Rohingya refugees back to Burma without protections or rights or deport them to an uninhabitable island in the middle of nowhere, & her denial of education to Rohingya children or employment to adults. Don’t ask me to identify the working people of Bangladesh or refugees with the predators who run the country.

This iconic & deeply disturbing photo from 2010 is a Bangladeshi policeman hitting a child garment worker with a baton during a labor strike in Dhaka. Anyone who sees this will find it unforgettable. Anyone who views any of the hundreds of photos of child labor in Bangladesh will find them unforgettable & traumatizing. Don’t ask us to identify these little kids with the criminal misconduct & exploitation of their government. Don’t ask us to apologize for criticisms of the Bangladeshi government. We hold them responsible just as we do the US government for the concentration camps they run for refugee children on the southern US border.