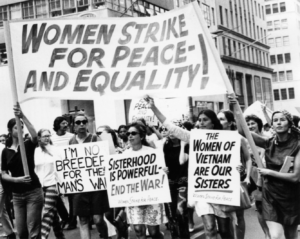 War, occupation, genocide are issues which directly impact the lives of millions of men, women & children but bear down in particular forms of barbarity on women & children. It should be elementary & undisputed that feminists take a principled, uncompromising stand against militarism in all its forms, against Islamophobic wars, occupations, genocides. Call it ‘knee-jerk’ opposition if you like, but to those grounded in feminist & antiwar principles, it is a mandatory commitment to humanity.

More regrettably than we can say, American feminists, particularly those associated with Zionism & the Democratic Party, went full throttle in shameless support for the Islamophobic wars, especially in Afghanistan & Syria, as if carpet bombing schools, hospitals, mosques, & fields, & committing monstrous war crimes against civilians were a way to liberate Muslim women. The racism was entirely colonial in its dimensions.

Zionist feminists became bloodthirsty in their laudations when Israel was carpet bombing Gaza for seven-weeks in 2014, targeting children in particular. Those feminists justified their inhumanity by claiming Palestinians used their own children as human shields. Hindutva feminists talk the feminism schtick while supporting the Indian onslaught in Kashmir, which for decades has included rape & sexual assault of women & young girls as a weapon of war.

So the question emerges–& it is an important question to the very character & fate of feminism–can you be a feminist if you are a war mongering Islamophobe, Zionist, Hindutva, xenophobe, or white supremacist? Let’s be frank: if you identify with any of those ideologies, you have quite an unsavory political character. But the answer to the question, ‘can you be that corrupt & still call yourself a feminist’ is not rooted in humanitarian & political principles so much as in the unstructured social network, more than a social movement, that feminism is today. Principled feminists cannot just go on a purging drive to rid the ‘movement’ of all such corrupt forces since there are no ideological or proprietary rights to feminism. But we also cannot stand idly while leading feminists orchestrate the chorus of war mongering & hating on Muslims under the guise of feminism as if their putrid racism represented the ideals of feminism.

The hateful war mongers & defenders of genocide cannot be forced out of the ‘movement’ in some kind of purge operation because that is a destructive way to resolve even substantial issues & it would more likely destroy the ‘movement’ as a whole, guaranteeing that it will never actualize, at least not soon, as an active, full-fledged social movement. But to protect the soul of feminism from their corruption & to win over the majority to see the imperative of linking women’s rights to the oppressed, to war, occupation, genocide, we must fearlessly, if not ferociously, debate, denounce, expose, out-organize, & discredit the debased form of feminism that they represent. Since the issues are life & death to so many men, women, & children, there is no need for diplomatic niceties in such debates. That was the commitment & political character of feminist activists in the 1960s & 1970s, though we have been maligned otherwise. But what has really discredited that generation is the association of prominent figures like Gloria Steinem with war mongering, Islamophobia, white supremacy.

Photo is first women’s liberation march called Women’s Strike for Peace & Equality on August 26, 1970 in NYC which I was directly & daily involved in organizing.