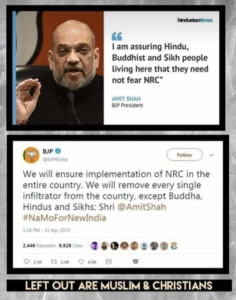 As the the current Minister of Home Affairs & president of the fascist Bharatiya Janata Party (BJP) since 2014, Amit Shah is one of the key Indian political figures orchestrating the siege & blockade of Kashmir. This meme from April 2019 explains so much, not just about what India is doing in Kashmir, but in the state of Assam, & the persecution of Muslims & Christians in the rest of India. As we know from history, Sikhs & others would not be free of fear: ‘first they came for Muslims & I was not a Muslim so I did not speak out…”
Indian democracy is at stake. It is not an overstatement to say that democracy everywhere is at stake if their genocidal campaigns are not massively opposed in India & around the world & decisively defeated.