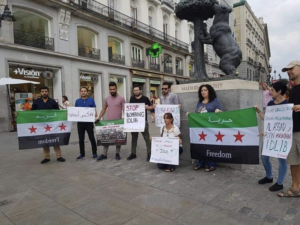 Madrid stands with Idlib, now under nearly five months of aerial bombardment by Syrian & Russian war planes using barrel bombs & incendiary weapons. It may be small but it is one of the few protests for Syrians anywhere in the world. Code Pink & the rest of the corrupt US antiwar movement are too involved in defending the abandoned Venezuelan embassy in DC & too supportive of Assad to even make a statement of protest.

(Photo from On The Ground News)