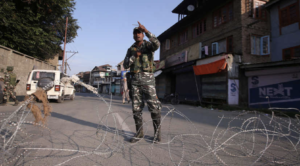 The article duplicitously said: “Pakistan condemned the action. China called it unacceptable. Many Western countries, along with the United Nations, Human Rights Watch & Amnesty International, took notice of India’s actions, but the Middle East remained mostly silent, even though Kashmir is predominately Muslim. Except for Iran & Turkey, there has been no significant response from the region.” Wow, that will bring Indian colonialism to its knees!

The truth is only a google away. Whatever criticisms one may have of the Pakistani government’s intentions, it has been vociferous in denouncing the Indian siege, including calling national protests across Pakistan today. China did indeed call the siege “not acceptable” but their genocide against Uyghur Muslims & arming of the Rohingya genocide hardly puts them on high moral ground to utter a peep. Not to mention, there are stronger condemnations of scratching your ass in public. Turkey “expressed concern”, a condemnation not even up to the standards against scratching your ass. As for Iran, which has ground militias in Syria against the Syrian Arab Spring, they really got tough by urging India & Pakistan against any “hasty decisions” in Kashmir. The UN & leading human rights groups “took notice” of the siege & blockade? You don’t get tougher than that. But what about Kashmiri self-determination, what about the occupation, the mass arrests, torture, rape threats, telecommunications blockade? What about the Kashmiri people?