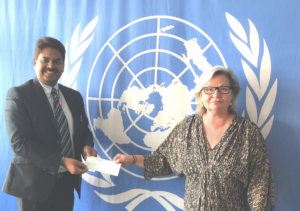 On August 21st, sixteen days into the complete blockade of Kashmir, the UN Democracy Fund, without a hint of shame, posted this photo on Twitter saying, “The world’s largest democracy presents its annual contribution to the UN Democracy Fund in a meeting between Anjani Kumar & UNDEF Executive Head Savill Annika.”

UNDEF was actually initiated in 2005 by India & the US under then UN Secretary General Kofi Annan who before his death in 2018 rendered invaluable whitewash services to Suu Kyi & the generals for the Rohingya genocide. According to the Fund’s mandate, it “supports projects that strengthen the voice of civil society, promote human rights & encourage participation of all groups in democratic processes.” Tell that to the Kashmiris.