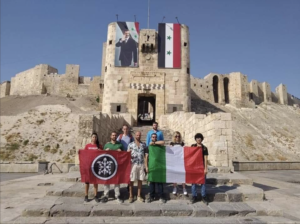 An Assadist named Maytham Alashkar is celebrating the return of tourism to Syria, including to Palmyra, Homs, Aleppo. “Syria is getting its tourism groove back,” he gloated. Among photos of tourists returning to Aleppo, he posted this one of Italian tourists holding up the flag of CasaPound Italy, a fascist party with 6,000 members.

According to one analyst, CasaPound (named after poet Ezra Pound who supported fascism) wants to redefine fascism as a movement to overcome the dichotomies of right-wing & the left. Was there ever a better representation of Assadism which is a rancid ideology & movement merging Stalinism, libertarianism, sectarianism, fascism, & the corrupt, aging couch potatoes of the left? We can predict that visiting war-torn Syria, where most historical sites are now rubble, will be a tourism hot spot for those political forces to gloat over the defeat of the Syrian Arab Spring uprising & victory for the self-determination of the Assad dictatorship.