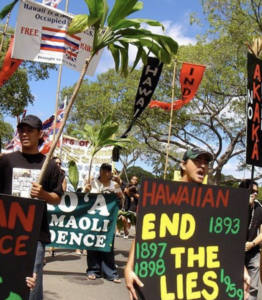 This is a repost from 2012 & belated a few days since August 21, 1959 is the date the US rendered colonial occupation of Hawaii ‘legal’ by declaring it a state.

August 21, 1959 is the date the US tried to render the theft of Hawaii legitimate by declaring it a state. There is no media coverage of the Native Hawaiian independence movement & no honest history taught in US schools of the forcible acquisition of Hawaii by the US military in league with plantation owners & agribusiness companies. Following the overthrow of Hawaiian rulers in 1893, the entire archipelago was annexed by the US. In 1959, statehood was fraudulently created in a popular vote on the question, “Shall Hawaii immediately be admitted into the Union as a State?” Those qualified to vote were US citizens who had resided in Hawaii for at least one year.

Since the US occupation & annexation in 1893, thousands from the US mainland had migrated to Hawaii, many stationed with the US occupying army. Any Hawaiians who took up US citizenship while under occupation were eligible to vote but those who refused to adopt US citizenship & instead declared themselves Hawaiian citizens were ineligible. That’s how Hawaii became the 50th state of the US–through fraud, chicanery, & theft.

Though Hawaiians continue to fight for self-determination & against the unlawful occupation, they are now less than 10% of the population, with many forced into diaspora on the mainland & replaced by affluent interlopers. Since the Hawaiian language is one of the cultural devastations of the occupation & diaspora, there is no way to say in Hawaiian, “the struggle continues”, la lucha continúa!

(This was originally posted in 2012 but has been slightly edited)