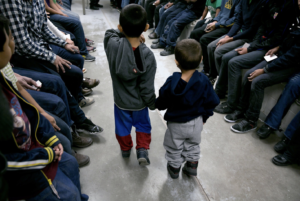 Thousands of refugee children arrested at the US southern border, separated from their parents or unaccompanied, dumped in concentration camps, are in grave danger from the rabid, demented white supremacists who run the US government. Hundreds of refugee children have been lost, most likely handed over to traffickers; hundreds are being sexually assaulted; hundreds are being abused in unvetted foster care; thousands are being held in Auschwitz conditions.

Since 1997, children in immigration detention centers were supposed to be protected under the Flores Agreement, the result of an ACLU class-action lawsuit against the physical & emotional harm done to children held in prison conditions. It was filed on behalf of five young unaccompanied girls in California handcuffed & strip-searched at their arrest, detained in squalid, dangerous conditions, & surrounded by a razor wire barricade. Flores mandated the government to release children to their parents, other adult relatives, or a licensed program within 20 days. It also mandated quality of life, including food, water, medical care, toilets, sinks, temperature control, supervision & as much separation from unrelated adults as possible. We would have to be insufferably credulous if we believed the Flores Agreement was policy & practice in most detention centers. But it did allow lawyers & health professionals to inspect facilities for compliance which is how we know what conditions actually prevail & why they are characterized as concentration camps.

In 2014, the Obama administration attempted but failed to overthrow Flores. But in the massive right-wing shift in US politics which they have forced through & with racist rabidity, the Trump gang has set its sights on destroying Flores. They began the assault on Flores last year by separating children from their parents in order to detain the parents alone, claiming that refugees brought their children only to shield themselves from the threat of long detentions. The Trump gang wanted to jail, prosecute & punish every undocumented adult who crossed the border. Wrenching little children from their parents created such a furor that publicly, although not actually, the policy was rescinded. In practice, they continue to separate children from their parents. The Trump gang then began a legal assault on Flores with federal lawyers going to court to get permission to hold children with their parents for longer than 20 days. The legal action to trash Flores failed in federal court in July 2018. They went back to court earlier this year to appeal the standards of care mandated by Flores. That’s when the federal lawyer argued that soap, toothpaste, & blankets were not necessary for children in the camps. Just ten days ago, the federal court rejected the appeal & upheld the standards of care which are anyway flouted while concentration camp conditions prevail.

Now in an end run around the courts, the Department of Homeland Security has proposed a new set of regulations allowing the government to hold children & families indefinitely & to eliminate minimum standards & conditions of care. That would scrap Flores & all protections for child refugees but it would also make adult refugees more vulnerable to the rabid racism of immigration officials when already with Flores thousands of children & adults are held in concentration camps. The oversight allowed under Flores by lawyers & health professionals would also be scrapped.

The proposed regulations still have to be approved by a federal judge. When they are published, the public has 60 days to comment followed by a 45-day period in which lawyers can, & certainly will challenge the government’s cynical & detestable move. We should not wait until the 60-day period to make our views on this criminal & dangerous proposal absolutely clear to this white supremacist government but should immediately launch a national campaign of protests & actions of every kind to force them to maintain & actually enforce Flores. Thousands of refugees, including little children, depend on our commitment & humanity. We cannot allow this government to put anyone in a concentration camp–child or adult.

The little boys in the photo are three & four-year-old brothers from El Salvador in the Border Patrol station in Brownsville, Texas.