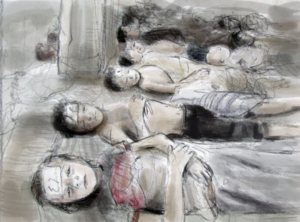 Gruesome images coming out of Idlib show children beheaded by Syrian & Russian bombing & a fetus with the umbilical cord still attached being pulled from rubble. In response to those images, Assadist Scott Ritter, former chief UN weapons inspector for Iraq, is tweeting quotes from Jesus & rancidities like, “The children who are being killed in Idlib are paying the price for their families siding with evil,” & “Those who chose to live under the sway of al-Qaeda will pay the tragic price for their decision.”

Did we mention that Ritter spent time in state prison on conviction for several counts of pedophilia & soliciting sex from minors online? His callous & contemptible attitude toward the suffering children of Idlib is of a piece with his pedophilia & his hateful sexualized power relationship with small children. Doesn’t take a quote from Jesus to know that.

This is a tribute by artist Marc Nelson to that “dark day” of August 21st, 2003 when Syrian war planes “carried out a terrorizing sarin gas attack on the people of Ghouta, killing at least 1,127 Syrians–among them 107 children & 201 women–& injuring at least 5,935.”

May we quote back at Ritter what he said about the children of Idlib: Epistle to the Galatians 6:7–“Be not deceived; God is not mocked, for whatsoever a man soweth, that shall he also reap.” That will assure that Ritter will rot in hell. So sayeth the Lord.