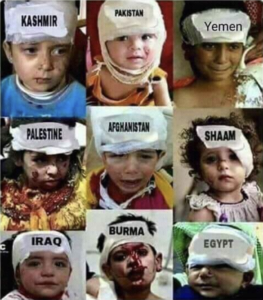 It’s not a coincidence that those children on the front lines of oppression–war, occupation, pogroms, persecution, genocide–are Muslim. This collage doesn’t even include all of them. Syrians are not specifically identified (Shaam includes them), Bahrainis, Muslims in the Central African Republic, Somalis, Libyans, Muslims in India, the Moro in the Philippines, Muslims in Sri Lanka, Kurds, & several other countries of the former Soviet Union. That’s what the excessive vilification of Islam, Muslim-hating & ‘jihadi’ propaganda is all about in media, movies, popular culture.

The reason is not that Islam teaches hate but that hate is taught against Islam because Muslims are not taking war, occupation, genocide lying down, beginning with the magnificent, even if eventually set back, Arab Spring uprisings. We say ‘set back’ rather than defeated because they will rise again after presenting some of the most advanced political ideas of our times & they will win if we can forge an uncompromising, consistent movement to stand with them. In the process, we will learn how to fight the same malignant forces in our own countries where nationalism, Islamophobia, anti-Semitism, white supremacy, xenophobia, racism, misogyny are gaining the upper hand.