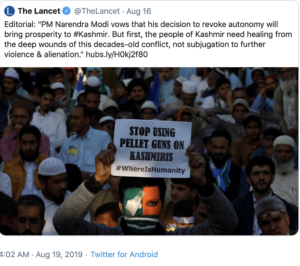 Hindutva medical personnel are trolling this Lancet tweet in high dudgeon for interfering in Indian politics & not sticking to health care. The depraved intellectual level of fascists is really quite appalling. Lancet has addressed health issues in conflict zones for decades, including damning reports in the 90s on the affects of US sanctions on the lives, disabilities, & mortality of Iraqi children.

War, occupation, genocide involve massive health concerns. In Kashmir, that would include the injuries inflicted by pellet munitions, rubber bullets, tear gas; the physical & psychological harm from torture, rape, assault, losing a loved one to forcible disappearance or imprisonment; the psychological impact on children & teenagers, on men & women of ubiquitous violence against them, the ubiquitous presence of martial force; the never-ending trauma of loss & grief from attending the funerals of so many shot down in protests & hunt to kill operations by Indian forces. Those are health issues & political issues.