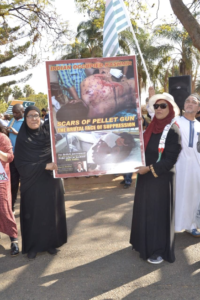 This placard from the Pretoria #StandWithKashmir rally protesting pellet munitions should be highlighted because of reports that despite restrictions Kashmiris continue to protest by the thousands, facing pellet guns, rubber bullets, & tear gas canisters. The SMHS hospital in Srinagar alone reported 35 young people with pellet gun injuries to the eyes since August 5th. It’s being reported that Indian troops are firing without provocation & not just at protesters. One victim was a 5-year-old girl riding on a motorcycle with her uncle who was delivering sacrificial meat for Eid. One young man was hit with a volley of pellets when he stepped out his front door; another young man said he was showered with pellets the moment he stepped out of the mosque after prayers.One Indian journalist reported that hospitals are on order to turn away pellet injury victims to keep incidents from being recorded. Several sources claim Indian forces regularly patrol the hospitals to get patients discharged without sufficient care so they can’t speak to media & even worse, many young people sustaining serious injuries are not going to hospital for fear of being arrested for taking part in protests. The Indian government of course denies all this. But some of the most damning reports come from Indian reporters who, unlike Barkha Dutt, do not have their nose up Modi’s butt.

We demand the immediate, unconditional withdrawal of all Indian forces from Kashmir & the immediate release of all Kashmiri political prisoners.