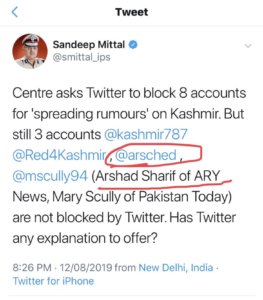 This guy is the Joint Secretary of the Parliament of India & he’s stewing because four mostly unknown writers & activists haven’t been banned by Twitter? Who the hell is running India if a Pakistani journalist & three writers, including a woman on Medicare, has them going bananas? No one ever said you had to be smart to be a fascist.

(PS: he apparently has problems with counting too. He listed four, not three.)