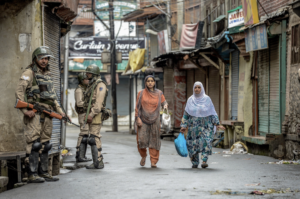 People who have never lived under occupation cannot presume to know how the occupied psychologically handle the ubiquitous presence of martial force. During my visit to Northern Ireland during the British occupation in 1983, the presence of armed forces & armored vehicles scared the hell out of me. When I pointed my camera at a soldier pointing a rifle at pedestrians going about shopping, the soldier pointed his gun at me until I put the camera away. But young boys pelted stones at armored vehicles & shoppers went about their daily lives as if the soldiers were not there. In one incident in Derry, several British soldiers emerged out of armored vehicles with rifles, encircling me & two Irish women walking down the street. In terror, I watched the women to respond as they did. They kept walking as if nothing was happening.

The nonchalance here is only apparent. We know that the occupied from Northern Ireland to Palestine to Kashmir suffer profound trauma & fear. Our steadfast demand must be that India immediately, unconditionally withdraw all its troops & immediately release all political prisoners.