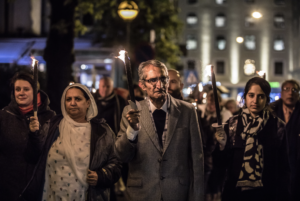 India has not released the names of the political activists & leaders arrested in Kashmir–by some accounts 100 & by others 500 arrestees, 70 of whom were flown out of Kashmir to a prison in India. The Rafto Foundation has expressed public concern over the safety of leading human rights activists Parveena Ahangar, director of the Association of Parents of Disappeared Persons, & Parvez Imroz, a human rights attorney & activist, who were both honored by Rafto in 2017 for their fearless & exemplary human rights work. Were they arrested? Was Khurram Parvez, the director of Jammu Kashmir Coalition for Civil Society (JKCCS) or any of the JKCCS investigative staff? He has played a leading role in the international fight against forcible disappearances. Were feminist activists hauled in for exposing the use of mass rape as a weapon of occupation? How many journalists have been arrested? Was 89-year-old Syed Ali Geelani dragged out of his home? How many stone pelters? This is alarming stuff. Terrifying that India would attempt to behead the political movement by arresting its leaders. They must be drawing lessons from the Assad regime or Stalin himself for how to deal with dissidence.

Our responsibility is to remain steadfast in denouncing these crimes & arrests & in demanding India immediately release all Kashmiri political prisoners.