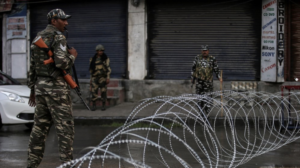 If there were ever a bolder expression of Indian democracy, it would be nearly a million occupying troops, razor wire in the streets, an entire population under house arrest & shot on sight if they attempt to leave their homes, the arrest of political activists & leaders, a complete telecommunications blackout, restrictions on traveling in or out of the country. In most lexicons, that’s called fascism.

(Photo of Kashmir from Al Jazeera)