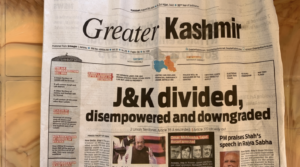 There was nothing precipitous about India taking over Kashmir in such an aggressive fascistic way. It was a show of power orchestrated to humiliate, overwhelm, terrorize & designed to have maximum demoralizing effect on the struggle against colonialism & occupation. The movement for azaadi was confident & fearless, with powerful writers & polemicists, unarmed protesters who stood up over & over against Indian troops armed to the teeth with pellet guns, rubber bullets, live ammo, tear gas shells. Kashmiri activists on social media had a strong voice & presence despite constant harassment & censorship on both Facebook & Twitter. Their educational & campaign work on social media had forced mainstream media to end the news blackout in order to manage the narrative without Kashmiri voices for self-determination dominating & the false narrative about a territorial dispute between India & Pakistan being sabotaged.

When India moved in over 100,000 troops in addition to the 700,000 already present, when it closed schools, set up more roadblocks, established curfews put an entire population under house arrest, shot at them if they tried to leave their homes, arrested political activists & leaders, silenced & threatened journalists, closed down all telecommunications even for commercial purposes, changed the juridical relationship to India to make Kashmir completely subordinate to India, those were actions designed to bring Kashmiris to their knees, to demoralize & humiliate them. It was an attempt to bring Kashmiri intransigence down to size because a confident freedom struggle is a dangerous freedom struggle to growing Indian fascism.

These kind of action are shattering & we’d be fools to think Kashmiris will not be afraid, if not for themselves, for their children. It will take them time for them to recover psychological & political equilibrium, to think through the strategies to manage these new political conditions, to organize defense of those who have been arrested, to figure out how to continue their political work & to stand up against the increasing aggressions of the occupying army without getting arrested or disappeared.

That’s where international solidarity comes in. We have to maintain a steady presence on social media reporting about the Kashmiri struggle, especially during the telecommunication lockdown. We have to organize forums, panels, media interviews & articles, teach-ins, protest rallies. We have to let Kashmiris know they do not stand alone & we have to support their struggle for political power by demanding the Indian government immediately & unconditionally withdraw all its troops from Kashmir.