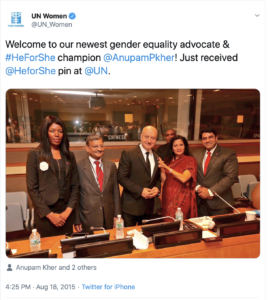 Bollywood actor Anupam Kher, an ardent defender of Modi & the nationalist BJP party, today tweeted: “Kashmir solution has begun.” By which he means the ‘final solution’ for the Kashmiri struggle against colonialism & occupation. This despicable piece of crap was appointed a UN ambassador for gender equality in 2015 even though he was already officially involved with nationalist Kashmiri Pandit politics. Now that he calls for the ‘final solution’ in Kashmir, will the UN women who appointed him denounce his ugly ass & bounce him? We need to campaign for just such an eventuality.