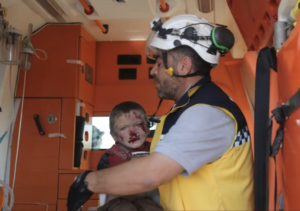 “The Syrian opposition is comprised of ISIS, Zionists, al-Qaeda, Neocons/Neolibs & Kurdish (Marxist) terrorist groups hellbent on bringing down a Western-educated doctor who puts his nation and people first.”

That tweet yesterday from white supremacist David Duke, former grand Poobah of the KKK, is in complete accord with Assad propagandists & their guppies in the corrupted antiwar movement. The reality is that it is little kids like this boy being bombed & rescued by White Helmets who are maligned as terrorists engaged in organ trafficking. Can there be any greater political corruption than vilifying civilians & humanitarian rescue workers to serve a dictator?