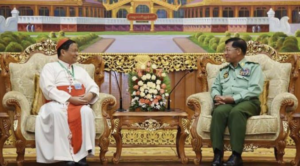 Catholic media is reporting that Burmese Cardinal Charles Maung Bo accompanied by the cardinal from the Philippines visited Rohingya refugee camps in Bangladesh. Of course they’re reporting the visit as a mission of apostolic mercy when Cardinal Maung Bo is compromised with genocide up to his eyeballs. He has an affable relationship with Suu Kyi & with General Min Aung Hlaing, the architect of the Rohingya genocide. At the height of the genocide in 2017, he appeared at a public ecumenical prayer fest called by Suu Kyi & the generals & never uttered a word of protest against the genocide. He later asked Pope Francis not to use the proper name Rohingya when he shamefully paid a state visit to Suu Kyi & the generals in November 2017, also at the height of the genocide. There are photos of the Catholic clergy in Burma scraping & bowing to Suu Kyi like feudal servants. If Cardinal Maung Bo is visiting Rohingya refugees, whose proper name he refuses to say, it is as an emissary of Suu Kyi & the generals, not as an emissary of Jesus.

What happened to the church of saints & martyrs that all Catholics are raised to respect as their history? If Cardinal Maung Bo is afraid to speak out against genocide in Burma, he should hop a plane to Rome & speak out against the slaughter of Rohingya from the balcony of St. Peters. That is the commitment to humanity required of spiritual leaders.

This photo is Cardinal Maung Bo having an affable meeting with the military architect of the Rohingya genocide, General Min Aung Hlaing on August 21st, 2017. At the same time, five other Burmese Catholic bishops were meeting with military officials to discuss “inclusiveness & cooperation for the political affairs & peace making process,” as the General’s office reported it.