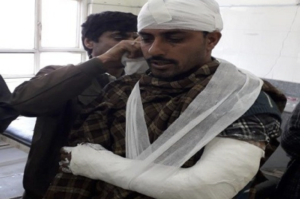 According to the Kashmir Media Service, during the month of July 2019, Indian occupying forces killed eleven Kashmiris, including a woman & a young girl, injured 80 civilians with pellet guns, live ammo, & teargas shells, & arrested at least 46 activists. There isn’t much about that in Indian media but there is plenty of coverage about the several improvised explosive device (IED) blasts in the Pulwama district of Kashmir (October 2018, February, March, June, July 2019). The February 2019 car bomb IED was a suicide mission against a 78 bus convoy of CRPF paramilitary troops. Forty-two Indian troops were killed. India blamed the Pakistan-based militant group Jaish-e-Mohammad. To enforce the idea that Kashmir is a territorial dispute between India & Pakistan rather than a Kashmiri struggle for self-determination against Indian colonialism & occupation, India then conducted airstrikes in Pakistan against what it called terrorist camps but which turned out to be forest land.

Since IEDs are a weapon used by irregular forces, it’s possible, maybe even likely, that they were set off by guerrilla operatives, though according to an unnamed Indian official cited by Al Jazeera, car bombs are rare in Kashmir. It’s also possible that some of the blasts were set off by Indian paramilitary operatives as a tactic to justify almost daily hunt to kill operations & to impose harsher conditions & restrictions on civilian life.

After the October 2018 IED attack in Trichal village, Pulwama, eleven civilians were injured when retaliating Indian troops went berserk, barged into family homes and beat the residents “ruthlessly”. In the March 2019 early morning IED blast in Tral, Pulwama, a civilian but no soldiers were killed & in June 2019 in Arihal, Pulwama, two civilians & nine soldiers were injured. Again, the Indian army retaliated in Arihal with a hunt to kill cordon. On July 27th, there was another early morning IED blast on the Arihal-Pulwama road with no reported deaths or injuries. In response, the Indian army again went on a rampage. Soldiers blocked the main road, started searching family homes, vandalizing homes, cow sheds, vehicles, assaulting young people, & harassing residents. It’s called ‘collective punishment’ which, as we also know from Palestine, is the nature of military occupation.

Since the Indian army has such a pervasive security & surveillance presence in Kashmir, especially in Pulwama, there are questions raised about the IED bombs. This March 2019 article by Basharat Shameem titled “10 Questions on IED Blasts in Kashmir” addresses some of them: https://countercurrents.org/2019/03/10-questions-on-ied-blasts-in-kashmir?