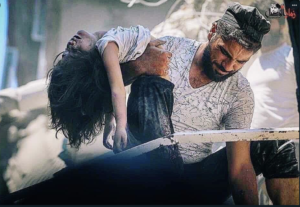 A scene from Syrian & Russian bombing of Ariha, Idlib: there are those who turn their faces from this reality or say, as Madeleine Albright did of 500,000 Iraqi children killed by US sanctions, that it was “worth it” to achieve US policy goals–or in the case of Syria, to achieve self-determination for the Assad dictatorship & prevent a “US regime-change operation.” To those so corrupted we say where, when, & how did you lose your humanity? What bizarre ideology swept you off your feet & rotted your brain so that the deranged accusations of Assad propagandists hold sway rather than the voices & documentation of the Syrian Arab Spring uprising against dictatorship?

Stop the bombing of Idlib! Demand the immediate, unconditional withdrawal of all Russian, Iranian, US-coalition (including Israel), & Hezbollah forces & mercenaries from Syria.