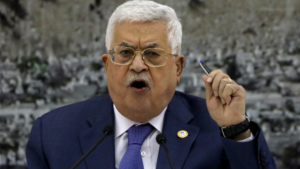 The day after the US blocked a UN attempt to shake the naughty finger at Israel for massive demolitions of Palestinian homes, unelected & unpopular Palestinian president-for-life Mahmoud Abbas issued another one of his empty threats to Israel saying the Palestinian Authority (PA) will stop implementing all its agreements with Israel. The PA was established & solely functions to implement & enforce the provisions of the Oslo Accords which legitimize Israeli occupation & expropriation, including the demolition of homes & entire towns in the West Bank. All other agreements are dwarfed in comparison.

It could change everything for Palestinians if this octogenarian traitor actually pulled his nose out of Netanyahu’s ass & untangled himself from subservience to Israel. But he won’t because if funding to the PA is reduced any more or eliminated altogether, who would pay for the upkeep of his lavish lifestyle? How could he keep Israel from blowing the whistle on the shady financial dealings of him & his corrupt sons as revealed in the Panama Papers?

The Palestinian struggle is one of the most important anti-colonial struggles of our times. This guy was installed to sit on that struggle & impede it, not to advance self-determination for Palestinians. A new visionary leadership is emerging from Intifada that will replace him with uncompromising fighters & consign him to the dust bin of history.

(Photo of Abbas by Mohamed Torokman/Reuters)