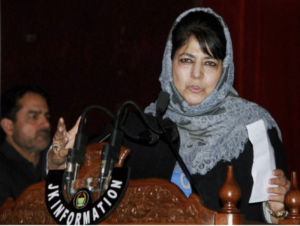 Mehbooba Mufti served as chief minister of Jammu & Kashmir from April 2016 to June 2018 in a coalition government with the BJP, the Modi party of Hindutva nationalists. She just tweeted “We the people of Kashmir need to stand up as one.” But in December 2016, after nearly six months of a brutal crackdown by the Indian occupying army, including months of curfews & thousands of pellet munitions against unarmed protesters, Mufti justified the extreme violence. In a public speech she asked Indian forces to start to ‘differentiate between offenders like militants & stone pelters & their families.” She had no problem shooting stone pelters with pellet guns & live ammo or setting up hunt to kill operations against militants, but she had scruples about the Indian army shooting at civilians?

That isn’t what the statistics say from that period in Kashmir called “the world’s first mass blinding” by pellet munitions. In just four months of that uprising & crackdown, 17,000 Kashmiris, including children, were injured; nearly 5,000 were arrested; hundreds of Kashmiri civilians were blinded, disfigured, disabled by pellet guns. Mufti didn’t & wouldn’t speak out against that because she was in a coalition with the Indian government engaged in the slaughter.

When Mufti calls for unity, she means something entirely different than what Kashmiri freedom fighters, including the stone pelters, mean. She does not speak for Azadi but for Modi.