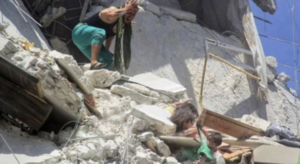 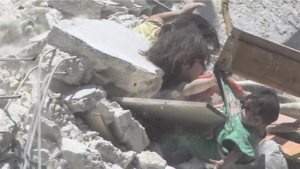 This harrowing moment is from a Syrian or Russian airstrike last week on a residential complex in Ariha, Idlib. The bombing caused the building to collapse & a young family to fall from an upper floor. Here the father Amjad al-Abdullah is screaming in horror as his five-year-old daughter Riham clings to the tee-shirt of her seven-month-old sister Tuqa to prevent her from falling off the ledge. Moments later, the building collapsed & both little girls fell five stories to the ground. According to White Helmet rescuers present at the scene, after saving her baby sister, Riham hit her head on a rock in the fall & died at the scene. Tuqa remains in critical condition but her mother Asmaa Naqouhl & three-year-old sister Reham also died in the bombing.

Meanwhile Assadist propagandists & their guppies in the antiwar & socialist movements ‘go about their doggy lives’ not just indifferent to this slaughter but exultant that by bombing civilian residences, markets, & fields, terrorism is being defeated in Idlib & self-determination for the Assad dictatorship is almost solidified. May they all rot in hell as they are stinking up the earth with their hatreds & stupidities.

Stop the bombing of Idlib. Demand the immediate, unconditional withdrawal of all Russian, Iranian, US-coalition, & Hezbollah forces & mercenaries from Syria.