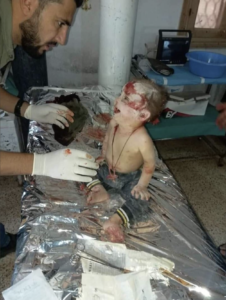 This child with the pacifier around his neck who survived Syrian & Russian bombing of Bawabiya village in the Aleppo countryside is a grim reminder that there were three million people living in northwest Syria which is being carpet bombed, including with barrel bombs & incendiary weapons. Fifty-one percent are children, 25 percent are women. Between 400,000 & 500,000 have been displaced since Assad & Putin launched their offensive on the region almost three months ago on May 1st.

Stop the bombing! Demand the immediate, unconditional withdrawal of all foreign military forces & mercenaries from Syria!